What Were the Changes? » Mana whenua

Improvements to reflect the identity of Māngere people 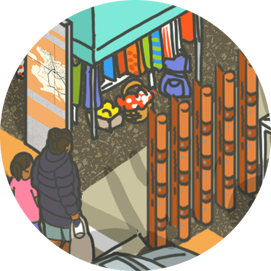 It was important that this project recognise the cultural connections that Māori – the indigenous peoples of New Zealand – have with the land, and to demonstrate the significance of the land to their identity.

To help bring the stories of mana whenua to life in Te Ara Mua – Future Streets, mana whenua representatives talked with the designers and researchers and identified what stories were important to represent.

Over and above the and cycling infrastructure, some dedicated place-based design and markings were installed in Māngere Central.

Mana whenua cultural landscapes enable all of us: mana whenua [people of the local iwi]; mataawaka [Māori from other iwi]; tauiwi [non-Māori]; and manuhiri [visitors/ guests] alike to connect with, and deepen their ‘sense of place’, and to understand mana whenua history. Watch the video to find out more.

For the Te Ara Mua – Future Streets project we wanted to strengthen people’s connections with Māngere by sharing knowledge and understanding of the area’s rich history. Identity comes from narratives and these narratives can be told through aspects of design.

Design can be used as a positive tool to aid the development of our streets and landmarks. It can make an area recognisable and can help enhance people’s connections. 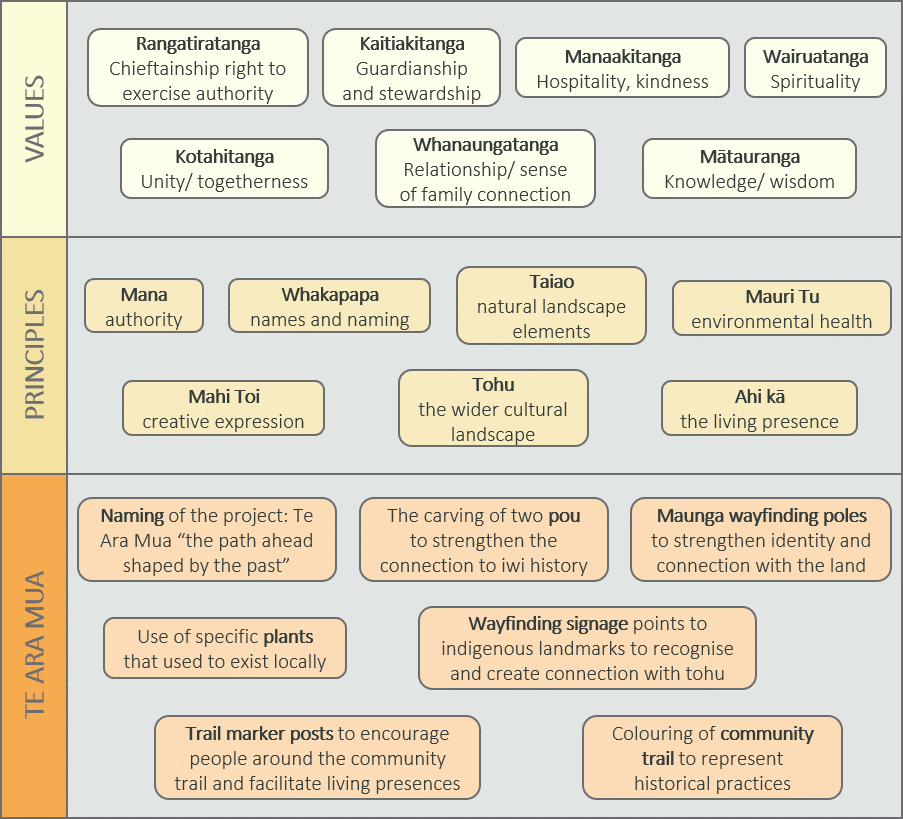 The Te Aranga Design Principles are a set of seven outcome-based principles founded on Māori cultural values to enhance iwi/hapū identity in the physical environment. They have arisen from a widely held desire to enhance mana whenua presence, visibility, and participation in the design of the physical realm. The Principles seek to foster and guide both culturally appropriate design processes and design responses that enhance all of our appreciation of the natural landscape and built environment.

The Principles are intended as an enabling strategic foundation for iwi/hapū to adopt, customise, and further develop in response to local context. The principles also provide other stakeholders and the design community with a clearer picture as to how iwi/hapū are likely to view, value, and wish to participate in the design and development of the built environment within their ancestral rohe [land]. 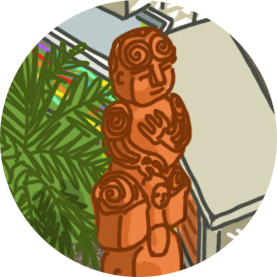 Pou whenua [land posts] are carved wooden posts used by Māori to mark territorial boundaries or places of significance. They are generally elaborately and artistically carved. Pou are significant to the Māori people because they reflect the relationship between the ancestors, the environment, and the reputation of the tangata whenua [people of the land]. 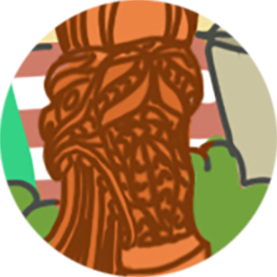 The pou on Mascot Avenue was carved by Sunnah Thompson. Sunnah’s iwi [tribe] is Te Kawerau-a-Maki. For a more in-depth video by Auckland Council about the carving process behind Sunnah’s pou, please click here.

The pou on Orly Avenue outside the Māngere Arts Centre was carved by Chris Wade, a Te Akitai carver. 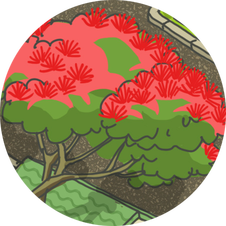 Manukau City originally had eight different ecosystem types. Māngere is located within the ‘Wetland’ ecosystem. Before settlers arrived in these areas, it was likely that they supported large stands of big kahikatea swamp forest. There also would have been a lot of boggy streams and wetlands. As a result, species for this project were selected to reflect the natural heritage, and to strengthen the identity of the area. 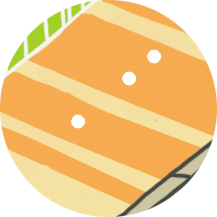 The Community Trail is a 2km circuit that goes around the community, along some busier roads like Mascot Avenue, but also through reserves. The colour scheme used on the painted surface of the Community Trail, and on supporting wayfinding signage was chosen through the mana whenua engagement process.

In Te Ara Mua – Future Streets, the yellow colour of the Community Trail represents the colour of the shark oil that was mixed with the kōkōwai to form the red paint.

We worked with mana whenua to develop wayfinding signs. These are poles and signs that guide people through the physical environment and enhance their understanding and experience of the space. In Te Ara Mua – Future Streets, three types of wayfinding signs were used. 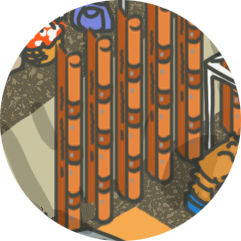 These pou were designed to lift people’s gaze and direct people’s attention to the maunga [mountains] near Māngere, such as Te Pane o Mataoho [Māngere Mountain].

These maunga are very important to the iwi and hapū of the area. These artworks serve to re-create a connection to local iwi history by acknowledging significant cultural landscapes. 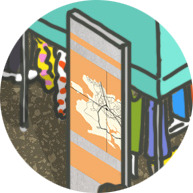 Maps and information signs were installed around the Community Trail and entrance to the Town Centre. They inform people about the sites of significance in the area.

Sites include marae [meeting grounds], places of education, and maunga. The silhouette of Te Pane o Mataoho [Māngere Mountain] can be seen in the back of the signs. 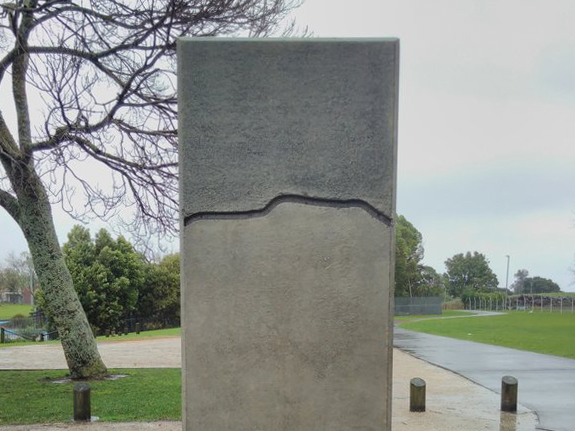 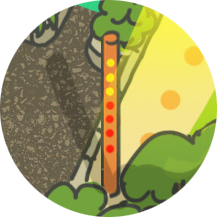 The distance markers show people using the Community Trail how far around it they have walked. The markers encourage people to keep going and to help them feel motivated.

The colours on the distance markers were selected through the mana whenua process.

How were mana whenua engaged with?

In settler countries, efforts to (re)implement indigenous cultural identity into community redesign can be challenging. For this to be effective it needs to be done with the leadership and collaboration of local indigenous peoples.

A Kaupapa Māori [Māori-centred] review of the Te Ara Mua – Future Streets mana whenua and community stakeholder engagement has recently been conducted. This was to understand what was done well, and also the lessons learned which can be applied to future projects to continually improve engagement processed.

See the changes
Back
Walking